This morning I walked with Sue and Nigel, a lovely couple I had met two nights before.  They are in their sixties and absolutely hilarious.  The second half of the day I walked with Richard and Lucy from San Francisco.  I had been hearing about them for days, but had not bumped into them. She is a Pharmacist and he used to be an endurance athlete of some sort in his spare time. I never really got to what he did for work.  They were also in their early sixties.  They were doing the walk because they really like Jane Austin which somehow lead them to the Coast to Coast.

It was quite pleasant today with rain in the morning and clouds in the afternoon.  This was the first day I had full rain gear on.  I have been carrying it every day and this was the first time I donned it all, right down to my gaiters.  It all did it’s job and I stayed nice and dry.

I stayed at the old Brewery guesthouse in Richmond.  It’s located at the bottom of a hell of a hill. I arrived in Richmond with plenty of time to walk around before dinner, which meant tackling the hill.  I bought a pork, apple and cranberry mini-pie and a custard tart as an afternoon snack.  They were lovely.  I met Nigel, Sue, Grahame, Toni, Gita & Sita for dinner at the Whetherspoons.  The food was alright, but the company was exceptional.  I’m sad I’m to continuing on with Sue and Nigel, I really enjoyed their company.  They are due to finish the walk 4 days after I do. 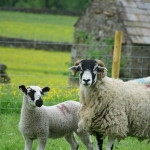