We have been in Morocco longer than any other country other than the US! It has been 24 weeks – 168 days.

We were at a campground near the coast of the Mediterranean Sea.  It was a good staging point for getting on a ferry to Europe as the port is roughly an hour away.  We arrived there a few Thursdays ago after leaving the Rif mountains, hoping to get on a ferry to Seté, France, on the 18th of July.  We had purchased a ticket, our third ferry ticket, to exit Morocco.

Morocco has partially opened up its maritime borders (between Seté, France and Genoa, Italy) for Moroccan citizens and residents, and foreigners in Morocco who want to leave the Kingdom. Technically, we will need to exit Morocco before the end of the State of Emergency which is currently set to end, August 10, 2020. The problem is that the US is not on the “safe” country list allowed to enter the EU.

The rumor mill was running in full effect around the campground.  The ferry will be cancelled. “Why?” we asked.

We didn’t receive anything saying the ferry was cancelled from GNV – the Italian ferry company we had purchased a ticket from. I tried calling the company in the morning, but was unable to reach anyone.  With the lack of any “real” information, we decided to pack up and head to the port, fingers crossed. We said our goodbyes to our friends, paid our camping fee, and headed towards the port.

We stopped at a gas station to fill up and get a car wash.  We didn’t want to give customs any reason to reject us.  In the past, mud/dirt on our vehicle has been an issue with customs and border control in various countries. 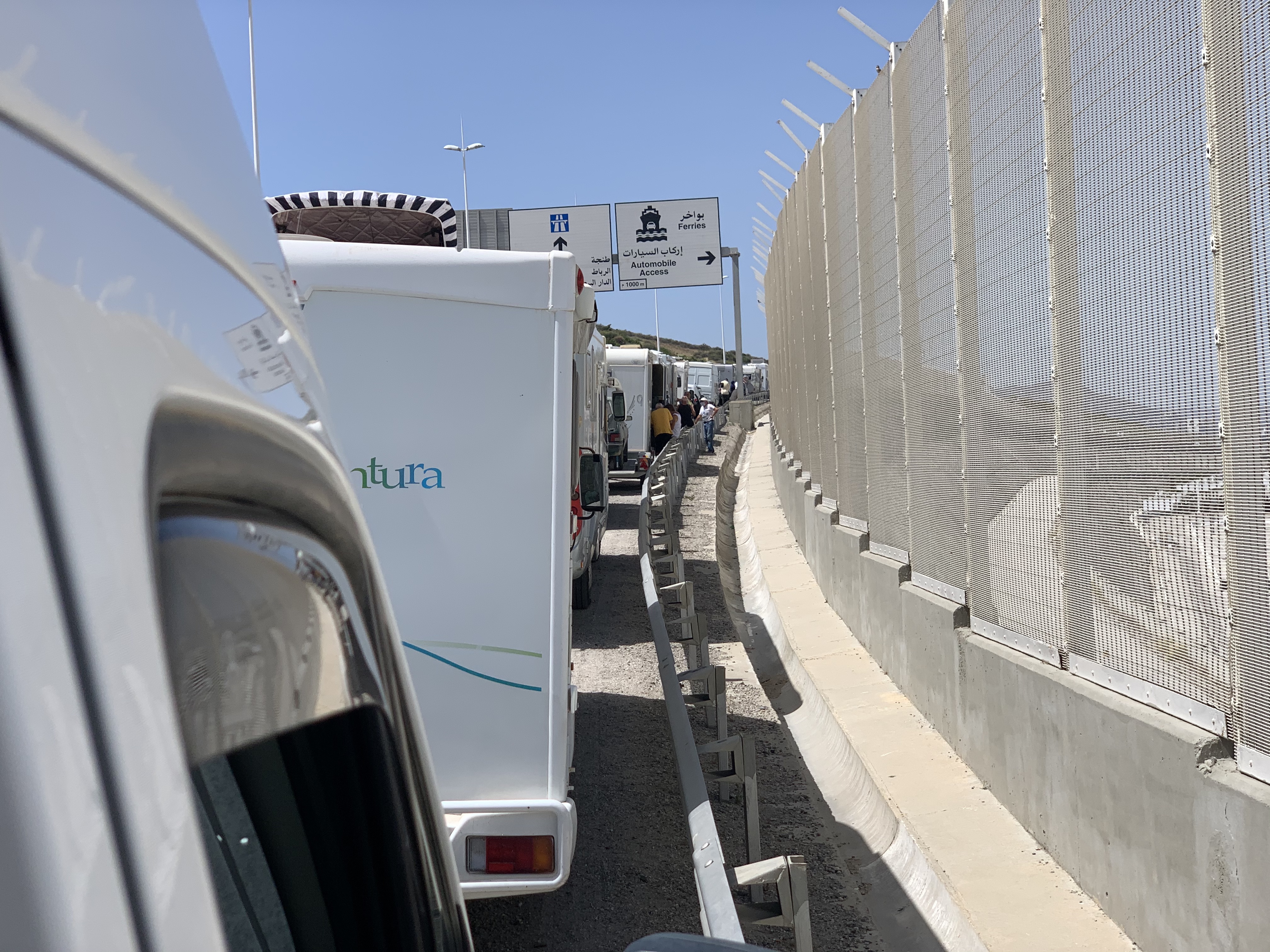 We arrived at the port and joined the queue that was over a half mile long outside the port.  I walked along the campers and passenger cars, and said “bonjour” to anyone who was outside their vehicles.  Most of the vehicles had French or Moroccan plates with a few Spanish, Italian and German ones sprinkled in.  After a few hours of waiting, the Gendarmerie came with sirens blaring and lights flashing to break up the line.  Eventually, one spoke a bit of English to say that the ferry was not going and that no ferry will go until the 22nd at the earliest.  No other explanation was offered.

We headed back to the campground by way of the Carrefour, a European style supermarket, to stock up on some food and adult beverages.

After what felt like hours of trying to figure out how to re-book our tickets and being on hold with the company for over an hour, the earliest we could re-book was August 1, 2020.  Time will tell if that actually happens…

After we returned to the campground, we experienced days of chaos.

The campground was buzzing with “information”:

Ryan and I made the decision to get a small AirBnB to distance ourselves from the negativity, enjoy a bit of AC since the heat and humidity was really getting to us, and to try to figure out how to get out of Morocco.

Here is Ryan cleaning the fridge.  Please note the gas cooktop sitting on top of an electric cooktop. 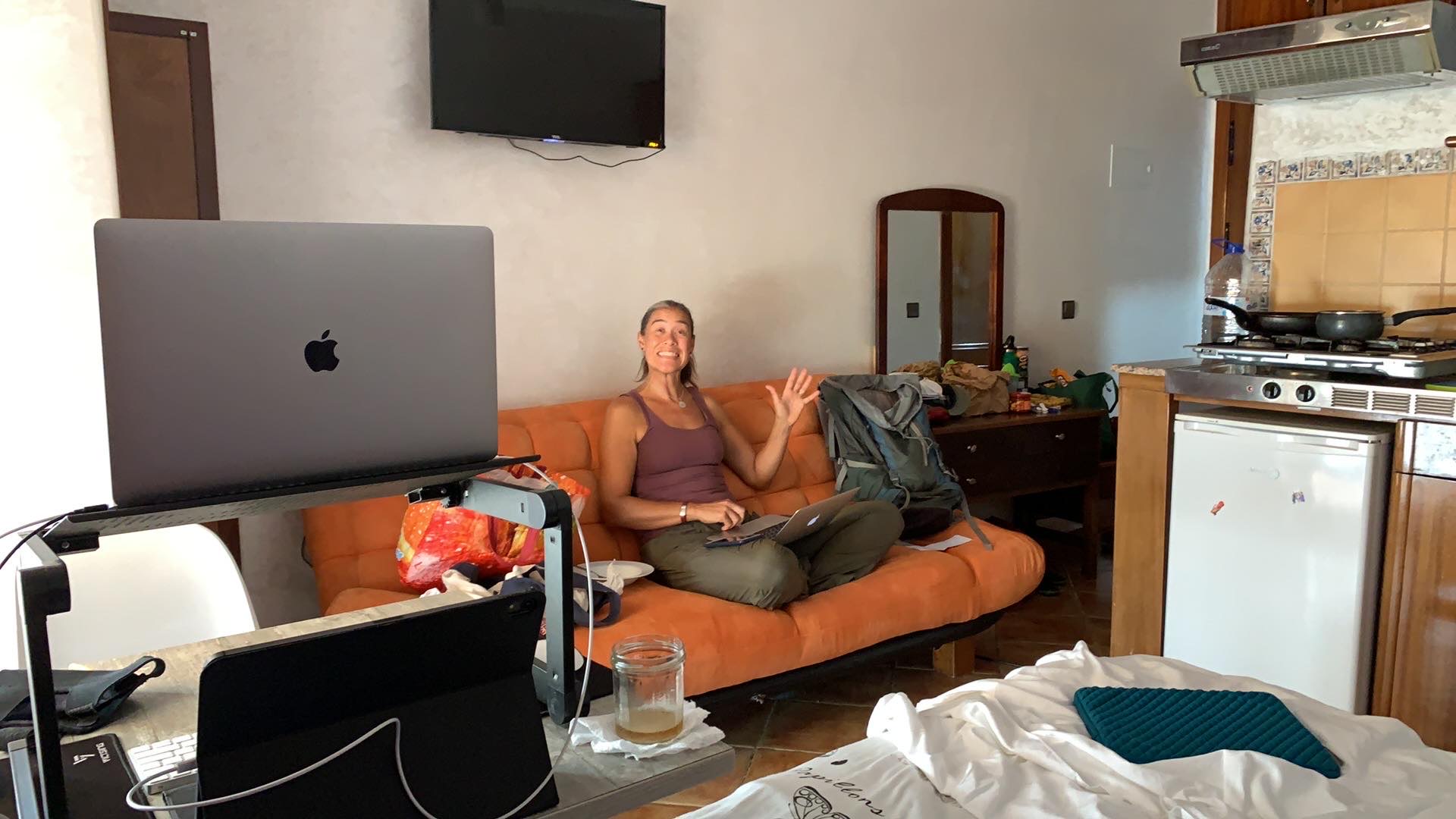 This AirBnB is compact, but a nice retreat from the heat.  We haven’t slept in anything but the van since January.

Time will tell what happens next…

5 Replies to “Still trying to get home”

This site uses Akismet to reduce spam. Learn how your comment data is processed.