We met our guide, Lino, in the restaurant of our hotel a little after 8am. We grabbed the of our gear and we were on the road by 8:15am.

We only drove about 3 miles out of town before we headed east and crossed the Batopilas River over an earthen bridge for lack of a better term. We immediately began heading up the mountain side. The climb was about 6000 feet in about 7-8 miles and took us a little under an hour! 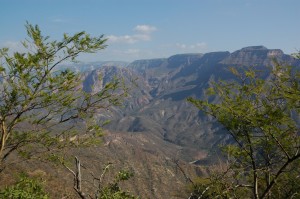 Once we leveled out, we were able to take in the scenery a bit more. At the higher elevations, it again looked like the Eastern Sierras; there were many pines despite it being pretty dry and rocky. The mid-elevations reminded me of Northern Arizona’s high elevations. Of course, the vistas of the canyons were spectacular. 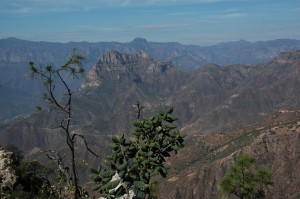 This is also the point where we were glad we hired Lino. There were many small farms and ranches on the road. This meant there were about ten barbed wire and wooden post gates we had to open and close to continue down the road. If we had managed to navigate the route to this point, I’m not sure we would have wanted to start down what could have been a “gated driveway” for some marijuana farms for all we would have known. If I were to do this road again, I would just call up the GPS track and retrace our steps…

The road conditions were generally what you would expect for a 6 month old, minimally maintained dirt road. There were sections that had pretty loose, small rocks that made the road “soft”. This would probably make getting up some of the tight switchbacks require a little bit of finesse if someone was in a two wheel drive, no locker vehicle, but probably still doable. If there had been heavy rains during or right before, I think a 4WD with lockers would even struggle at times. Fortunately, we did not have to worry about this. Again, I’m not an expert on Unimogs or Dual Sports but, I think in dry conditions with a skilled driver this road would be possible and even enjoyable. Oh, and of course the livestock… 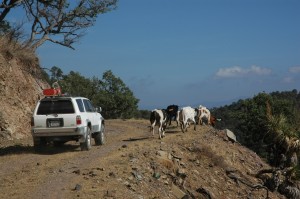 About 2/3 of the way through our 46 mile journey, we came upon an awesome overlook into the Urique Canyon with view of switchbacks down to the river. And, this random, nice looking sign that didn’t seem to fit given the road we were on… 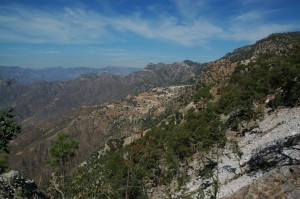 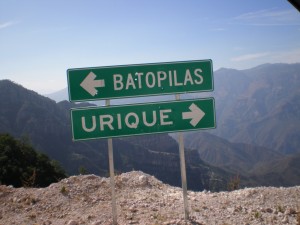 The drive down was pretty uneventful. When we met up with the Urique River, we were at the town of Guapalayna (or Guapalaina on Google Maps). The river need to be crossed next. We did not even have to walk the river to see how deep it was. An older gentleman was just beginning to walk across it when we arrived! It was pretty apparent that there was less than a foot of water. We just followed his path. So, again, we had a pretty easy river crossing.

We had just four more miles to go down river (on a dirt road) until the town of Urique.

But first, we had to carry out our first vehicle recovery! A few kids, aged from 10 to 14, were driving their father’s F150-like truck up the earthen ramp from the river bed up to the shelf road that was about 10 feet above them. We were on that road and saw that they had slipped their 2WD pick-up truck’s rear wheel off the ramp and the other rear was against a rather large rock. They we going nowhere. But, they kept trying. Their tires were spinning so much literally burning the rubber off of them. In some places, the tread was down to the threads (or radial belts?). Our guide said it was impossible for us to help; there was nothing we could do.

We said we would help. They were not stuck that bad. Of course, their truck had no recovery points up front. We could not even find the transport tie down holes. Judging from the beat-up body and other damage to the truck, as well as the ongoing damage, I figured it was an acceptable risk to use their stock front bumper. It was held to the frame rail by two 1/8 inch steel brackets. We looped the tow strap around both. I told LeeWhay she was the “Safety Officer” and to keep everyone back. I told the 14 year old driver, through Lino, to go very slow and stay with me. This didn’t happen. We got him out and his bumper was now four inches further out in front. He didn’t care and was probably just glad his father wouldn’t have to get involved (my guess).

Lino was really impressed with the recovery gear. This was literally a $30, four inch, yellow, eBay tow strap (maybe rated at 20,000 lbs) and a $20, 5/8 inch D-shackle. I’m just relaying this point to give you a sense of how unprepared it seems people are down there for getting unstuck. So, make sure you are pretty self sufficient. Also, I said it was JUST $50 with of recovery gear. That $50 is a decent amount of money to most people in that area. (BTW, I had a much better kinetic recovery strap and larger/better D-shackles. I didn’t want to risk cutting that strap on such an easy pull.)

So, we make it to Urique about 5 hours after leaving Batopilas. The plan was to eat lunch with Lino, part ways, and find Entre Amigos. Lino said he had never heard of it. We went to a restaurant that he knew the owners. We had a good lunch at Restaurant Paulina where we me the owners Mamma Tito and Jose. It had a really nice indoor/outdoor garden with these huge toads living within the plants. Of course, they had never heard of Entre Amigos either. But, they had this hotel we could stay at…

We decided to drink a few more beers with Lino since it was still mid-afternoon. Meanwhile, a white guy who was speaking much better Spanish than us came in and was eating a meal not too far from us. We didn’t really talk to him much at first. While traveling in a foreign country, I always feel a little awkward seeing someone who is likely English speaking and just go up to them and start conversing in English. For all we knew, he was not an English speaker. After about half of an hour, we finally did hear him say something in English. So, we talked to him a little bit and found out he lived in town most of the year. Interesting… It turns out he was staying at and care taking for the owner of Entre Amigos while the owner was back in the US!

Now, we’re in an awkward situation. We had already told Jose the restaurant owner that we would stay at his hotel, the Hotel Estrella del Rio (350MXN). Even though Jose knew we were originally looking for Entre Amigos, the caretaker agreed with us that it was probably a good idea to “spread the wealth” and stay one night at each place. As we were leaving, the guy said his name was “Caballo Blanco”!

Who is that? I would not have known. But, LeeWhay was reading “Born to Run: A Hidden Tribe, Superathletes, and the Greatest Race the World Has Never Seen”. This is a (mostly) non-fiction book by Chistopher McDougall about the Tarahumara/Raramuri people of Copper Canyon and the race they run that is organized by Caballo Blanco.

In a nutshell, Caballo Blanco is an American who lives in the Copper Canyon area a good part of the year. He organizes and fund raises for the Copper Canyon Ultra Marathon. He is an accomplished runner himself. See the below article for more info:
http://caballoblanco.com/SWEAT_Sep10_Feature.pdf 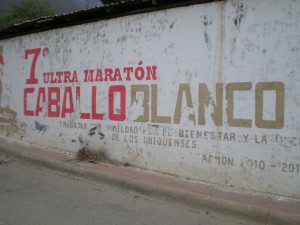 Next, our experiences in Urique and our time spent with Caballo Blanco…

One Reply to “Copper Canyon – Day 8 (Batopilas to Urique)”