This day would prove to be our longest day of the trip.

Since we had been “out in the bush” for five days, traveling for 220 miles, and depleting our pesos, we decided to go back to Creel via Divisadero. Divisadero, which we wanted to see anyway, was only about 30 miles from Creel. So, the most we would be potentially be “wasting” was about 60 miles.

Creel is the only place we knew we could find an ATM and a Pemex. We knew there were none behind us. Given that San Rafael had no ATMs or Pemex’s while being the biggest town on our maps going forward for a couple more days, we thought going back to Creel was our only option. Of course, we were wrong.

In retrospect, there was a Pemex about 30 miles going forward from San Rafael. And, we began burning many fewer pesos from here on out since we stopped staying in hotels after all of our cold, mousey experiences. Even if we needed to spend more pesos than we had, we always stash several hundred dollars in relatively hard to find places within our trucks. Although, we try to reserve that as “emergency” money.

We woke before dawn, packed up in about 15 minutes and were out. It had finally stopped raining at some point during the night. So, our trucks had a thin layer of ice on them. We thawed out and aired up since we would be on pavement again for several hours. Divisadro was about 10 miles up the road. We stopped for only a few minutes due to the fog obscuring the view of the valley. On to Creel.

Creel was reached with about an hour to go before the bank (hence the ATM) was open. We took the opportunity to gas up, reprovision our water/snacks, and eat a leisurely breakfast at Restaurant Tio Molcas. While doing this, we ran into Gary and ???, the dual sport riders, again. Gary was in dire need of some antibiotics to treat his traveller’s diarrhea, so we gave him one of our doses of Cipro.

On the way back down to Divisadero, the weather began to cooperate! Here is the view: 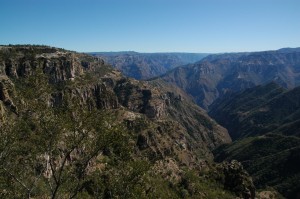 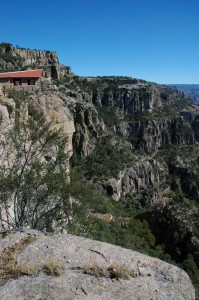 Soon after we passed back through San Rafael, the pavement ended. About 30 miles on, we reached the town of Temoris which has two Pemexes. (It seems as if gas stations are distributed by distance rather than population in the Copper Canyon area since Temoris seemed smaller than San Rafael.) Around 2pm, we came across an authentic Baja fish taco stand as we entered town. I write authentic because the proprietor told us we lived and worked in Ensenada for many years and gets frozen fish brought in just to make the tacos. They were yummy!

We did not get a a good vibe from this town. Maybe it was the stares we got, maybe it was the helicopters that were hovering around the area. We had been told previously that the government used helicopters to located the marijuana fields. That was our only theory why they were there. Who knows. Regardless, we did not stop anywhere else in town after we first entered and ate the fish tacos.

After Temoris, things really slowed down. The road had not seemed to be graded for quite some time. Ruts, puddles, and small stream crossings were the norm. It was hilly but were gradually heading down into the Chinipas River valley. We went from around 5000 feet to about 500 feet. Even though Chinipas was only about 30 miles away, we didn’t get there until around 4:30pm. 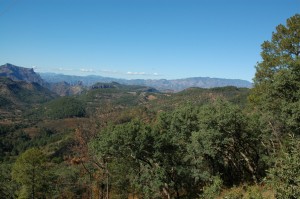 Chinipas was another small town. (Maybe on the order of Temoris?) The setting was amazing. It was situated right on the Chinipas River and surrounded by low-slung hills. The river was the largest we had seen to date. I had read stories and seen pictures of people making the crossing – I was not looking forward to this. We would have to figure it out tomorrow since the light was getting low…

When we arrived, we drove right through the entire town on its narrow streets hoping to find an RV lot or campground. We got a good vibe from the town itself. There was an organized youth soccer match going on right in the center of town. It seems as if about half of the town was there. We had to weave our way through the crowd to continue on. Well, no stealthy arrival, everyone knew we were there. This has pluses and minuses of course.

As I said before, we were done with hotels. There were some available if we could not find a suitable place to camp. We found the church; it looked like an option. The downside is that it had residences lining the narrow streets on all sides of the church. Just beyond, we heard the river call to us. We drove over to check out the riverbank. It was a shallow bank strewn with rocks that were marble to bowling ball sized. Some large 2-8 foot tall shrubs gave some privacy from the edge of the town which was several hundred yards away.

We drove back towards town as the crowd from the soccer match was breaking up. LeeWhay got out of the truck and asked a group of older men if it was ok to camp on the riverbank. That was all we needed to hear.

The evening was the warmest we had encountered since Nuevo Casas Grande due to the much lower elevation we suspected. We set up camp about 100 yards from the river at twilight. Since we did not have official permission to stay on the bank, we were a little on edge. We did get some curious gazes as a few people walked and drove by on the edge of town. But, nothing like the stares we got in Temoris. As we listened to the goings on of the town: cows mooing, muffled music, and people laughing, our tension subsided. But, the river’s constant din reminded us that we needed to get across it, somehow, tomorrow…

We ate a quick dinner and drank a few beers. The sky was so dark in this area that we saw many shooting stars that night.

P.S. Same intermittent suspension noise. But remember, our plan was to do nothing since we couldn’t identify anything…

P.P.S. In Chinipas, there were no Pemex’s but private gas was available.