This was our first day in the Simpson Desert!

We left Birdsville after getting the last of our tasks finished: ate one last meal in a restaurant, got beer, connected to the internet, and topped off our water.

The results were that we have now eaten at all (both) restaurants in Birdsville, paid the most we ever had for beer – $45 for a 12-pack, and paid $5 for a half hour of slow Wi-Fi.

At around 11am, we arrived at the first dune which is called “Big Red” or “Nappanerica”. It is supposed to be the largest dune in the Simpson. This means it attracts many day trippers from Birdsville who wish to conquer it with their vehicles.

Of course, we went up and down it on the easiest of the tracks. Some people say the dunes get taller and more spaced out at one travels from West to East. We hope they are right since that would mean we travelled the hardest section today.

The conditions have not been terribly challenging to this point. The sand is not too deep. The traction is good which could be attributed to airing down the tire pressures to 14 PSI, 18 PSI, and 8 PSI on the front, rear, and trailer, respectively.

What has been a bit tricky to master is which gear on the transfer case to be in. If I stay in low range the whole time, getting up the dunes has been no problem. The tradeoff is that our gas milage will suffer if we stay there for the inter-dunal flat portion. Stopping to change the transfer case gear can be tedious and loses momentum/speed impacting milage.

Most of the dunes have been able to be summited in high range. But, the occasional soft sand summit has caused me to bog down the engine. Further, doing this is not great for the automatic transmission temperatures. Luckily, stopping mid-dune and going into low range has allowed us to keep traveling up the dunes. Usually, stopping mid-ascent of a dune is folly. But, like I said above, we have had good traction so we have made every dune ascent the first try.

Maybe this method is how we will cross the remaining 900 dunes (of the over 1000 total). Or, maybe I’ll get better at picking the correct gear. Or, maybe it will get more difficult and we will have to turn around. Stay tuned…

Pop quiz! Two parties that cannot see each other proceed up a dune  headlong. How do they avoid a head on collision?

The failsafe is a flag on the front bumper (hopefully) that rises 3.5 to 4 meters above the ground. The theory is that one of the drivers will see that before they crash. It has worked well so far. We met two Utes and a motorbike on the crest of a dune and were able to avoid anything bad happening.

The second method is to use a UHF CB radio. This is predominantly the short-range communication method people use on the Australian highways and in the Outback.

The procedure is to call out on the designated channel every so often at the top of a dune. You say something like, “Single vehicle heading East on the QAA Track about 30 km east of Poeppel’s Corner.”

If you hear no one, keep on truckin’. Make sure to always look for that flag though!

If you hear someone respond with a location near you, coordinate a plan with them. Usually, one party decides to wait at the bottom of a dune and let the other passes.

On a stop to show off the trailer to some interested Australians, we discovered that some of the lids to our Wolf Pack bins had come loose spilling some of the contents. We had a Sriracha explosion, the glass jar of our coffee grinder was shattered, and the food box was in disarray.

Before we shipped the truck and trailer, we decided to replace the Wolf Pack’s latches with bungees in order to make access quicker. The chopped up dunes showed us that this was a mistake. So, we repacked boxes and put the original latches back on to keep the lids secure. 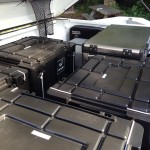 This showed us once again that we shouldn’t violate one of our cardinal rules: Don’t change anything with the vehicle a month (plus) before you depart.

We met a real Crocodile Dundee who goes by Dingo Dundee. He insisted that he get a picture with the Americans holding his knife. 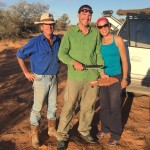 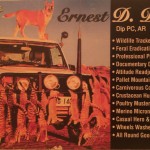 The stars are numerous and beautiful. Time for bed…